I'm born Finnish, which corresponds to the same thing. Also, 110°C sauna is not fun when the old man next to you throws more water on the kiuas (the stove thingy) :p I'm not entirely sure if the steam wave is equally hot to the sauna stove, but steam anywhere near that temperature on your skin kinda makes it go red. Then jumpjump into a cool lakey! ^__^ --Chaos? -- 21:44, June 4, 2010 (UTC)

Do you really think so, bud? Was it good?

wat? i havnt played gw in a week apart from half an hour yesterday to find out what happened with bro cause chris was going on about all the random shit that happened and i havnt asked you to gvg in months nig :p--Steamy..x 12:35, June 7, 2010 (UTC)

Chaos' purely sexual nature denies him the bonds of time. It is both a liberty and a curse for him, considering that he could be causing the young men of Europe to orgasm for 3 hours or 3 seconds, he simply can't tell the difference. His transient, subtle existence also allows for him to have experienced sex in times and places no one would have ever thought possible or in any way desirable. You remember all those stab wounds in Julius Caesar? Yup, Chaos has fucked each one. Helen Keller learned to mimic hand signs and noises right? Wrong, Chaos was fucking her and causing her to have uncontrollable cries of pleasure and pain while her hands waved about. The dinosaurs were wiped out by a meteor, right? Again, wrong. Chaos fucked each one into a permanent coma causing their pristine preservation in time, frozen in rock with the exact same expression they each had at their deaths of both incomprehensible glee and unified terror.
In short, please forgive him if he forgets where he is or what he's doing. Karate

I shall give it to you as soon as you log on to gilwors, wouldn't feel comfortable posting my e-mail here :o--Schoko Ze Germun

To save your miserable day (just an assumption) 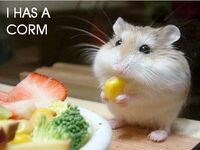 I did? I thought it meant "cool". Like fsc = Frostysocool. I'm bad at teh abbrevs. Karate

I recommend not using them at all, or crow may flame you for being a faggot. --Frosty

That'd be lms instead of lsm, du Schwuchtel--Schoko Ze Germun

Don't judge something you have no idea about. --Frosty

Steamy, I will do this grunt editing work... I say keeping the stoning spammer page and merge in some talk/variations form the Attuned Eruption page. Ok?

Ok, I am catching on to the way of things here at pvx. Thanks for your helpful suggestions. Do you have the time to look at Build:E/P Fall Back Nuker. I think it is a very cool build that has a place here at pvx. I don't understand the procedures regarding the deletion of pages. Help me out here? --GeroWizhard 22:53, June 11, 2010 (UTC)

Ive looked at it already and yeah it is a cool build which is while we already have it which is why its tagged for deletion ;) we dont need 2 copies of pretty much the same build. And only admins can delete pages, you can put a deletion tag or a well tag on it, well tags are for saying its inferior or a dupe or whatever, deletion tags are for EXACT dupes, author requests, broken/unneeded pages etc. just put {{well|reason here}} or {{delete|reason here}} to tag them. Whats your MSN btw?--Steamy..x 22:57, June 11, 2010 (UTC)

Thanks. I was unsure of how to add this variant to the Build:E/any_SH_Elementalist (which seems too broad a concept... Justified by the recent Build:Me/E_Fast_Cast_Nuker branch off).--GeroWizhard 23:07, June 11, 2010 (UTC)

Hes picked up a mug!

"versatile bar, inferior to others, basic attackchain - Shadow Prison USED to be great" just wondering how it isnt great anymore, the aftercast doesnt stop the strong hex-required chain from going off, trampling > horns, and how is it inferior to others?

Take into account the amount of time before you get the first KD in, thats easily enough time to prepatient so it heals during the spike or get dolyak off, you cant activate dolyak while knocked which is why WC is superior in every way. Also that loses bar compression by having to take 2 shadow steps.--Steamy..x 19:56, June 11, 2010 (UTC)

I'm too tired and ill to explain shit properly or think properly or bother to work out why your lolling at me and im going to get some sleep--Steamy..x 23:01, June 11, 2010 (UTC)