I'm kind of stuck reading over and over the same page about page creation. I have created a build on my page, does the pvx community have to approve testing or can i simply move it to the testing section? its called build:e/mo Weakening Shockwave PuneY 12:22, 5 July 2008 (EDT)

You cant vote on trial builds, you have to wait until they're put into testing.

IF you want to put that back into Trial so that you can alter the build, you should ask for an admin to "vote wipe" it. The trash build tag was on it because in the voting stage it reached an average score of 1.67 out of 5, which is too low to retain it on PvX. There should be some examples of people asking for a vote wipe on the board already so just copy what they've done. - PANIC!

and..... * A vote must constitute an objective judgment of the build's qualities. It must not be biased by sympathy or any other prejudice regarding the author. This applies in particular to votes given by authors themselves or their friends. Votes that deliberately overshoot in favoring or unfavoring a build in order to 'compensate' another vote are not acceptable either.

You can appeal against votes you don't agree with on the Noticeboard, too. As far as builds are concerned, once they are posted then they are technically publicly owned by the wiki and you should treat it as such. Distance yourself emotionally because it's no longer "yours". If people hate it and vote it down, then calmly appeal. If the build master who reviews it agrees with the votes, then just move on and forget about it being hosted on wiki. - PANIC!

Also, when you indent your text, indent it with just 1 more ":" than the person you're replying to used. - PANIC!

While i am getting emotional, it's not for the reasons you think, i'm upset cause the system does not work like i thought it would, 4 random wankers voted with no comments other than "sux", i'm upset because this so called "community website" is not a community, and if it is then it saddens me. No testing was done on anyone's behalf other than my own, while a few people actually gave "genuine input",the randomers simply looked at the build and voted against it, this isn't just some random outburst by me, those votes have been there for days and it didn't bother me, why? because i thought sooner or later someone with brains would test and vote, just like i did on a few other builds other than my own... but nope, doesn't work that way. soon as someone like godless feels the need to trash a build he does so. gg pvx sorry but u suck as a community.PuneY 07:32, 15 July 2008 (EDT)

QQ plus. Voters have no requirement to test every build posted on the wiki before voting. They way we're iunundated with bad builds, we'd never vet anything. Secondly, your build is bad. For it to work your target has to be in your ward to succeed. With no snare of any kind, this isn't all that likely to happen. Secondly, you're trying to use PBAoE skills on a 60 AL squishy. Just getting into range to use your skills is going to get you ripped apart, yoiu'll most likely be dead before you can get anything off. Next, you've got three optional slots. That's bad, as it shows your build lacks focus. Most great, or even good, builds you find on wiki will have maybe one optional slot. More often then not they'll have no optional slots and will simply list variants. Open-ended optional slots aren't good, they stop the build from having synergy and focus. So yeah, was that a good enough explanation of why your build blows? --Golden

yea actually that was a good explanation but if u actually had the brains to be able to read down further you would see that in essence there were no optional slots.. oh sorry for bursting your bubble there, it works because it takes a total of 1.4+1.4 seconds for the effect, the only reason the whole entire team would target you would be on the assumption, that your team is a pack of nubs who ran in the opposite direction, or 3 warriors and 1 ele, either way as squishy as you are, that's what the so called optional slots are for, heals/defense, they seem to work, but what would i know? --09:18, 15 July 2008 (EDT)
It's almost like you guys pretend casters always stay on backline and melee only target other melee, wouldn't that be nice, too fkn bad it doesn't happen like that and 10/10 times u got an assasin and warrior combo beating you down POINT BLANK!PuneY 09:24, 15 July 2008 (EDT)

Lulz yes, casters are supposed to stay in the backline, that way if the melee extends to attack you in the backline, they're out of range of support and you can beat the shit of them. And as a general rule, all RA builds should assume your team blows. If it isn't effective on a completely horrible team in RA, it isn't a good build for RA. Stop being so bad and quit QQing. You posted a bad build, get over it, learn why it's bad and write a better one.--Golden

Game. Set. Match. You know when you've one when your opponent stops arguing and tells you to gtfo :)--Golden 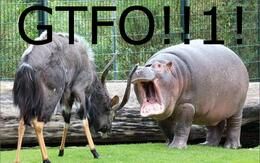 That conversation needs to go on grinsh's epic quotes page.

hmmmm that was my argument, its my user page and i can so don't tell me what to do, secondly cause u morons still don't get it, the only reason it has escalated to this is because i was posting random comments such as "i vote this user page 0.0 only suitable for the moon, it is thereby scheduled for deletion" not... WAH WAH WAH MY BUILD IS PRO U GUYS ARE NUBS!!!~~! then was told i was trolling. So whatever... Your the one that has my user page on watchlist so you can argue with everyone else. who's the sad one here???--PuneY 03:13, 16 July 2008 (EDT)

=/ You sound like me when I first joined minus the trolling part. I had a set mind on what was good an bad, this place told me I was wrong and after a while of doing what you did...I finally got "Oh shit, they're actually right".--

lol same when i first joined i completely sucked at gw. i learned gw from this wiki. i got so pissed at bob fregman lol but yeah, now i dont suck as much.

Yeah, eventually I just thought "How could it be possible that an entire community is wrong and I am right? I've never even won an HA match before, fuck I've never been to the UW!" and then I read what they said more closely, tested out what they recommended and I started to understand the game. But, I didn't learn EVERYTHING from this place. Gatta learn somethings on your own.--

Pages in your user space

Perfectly acceptable to clear those. Unfortunately, ALL talk pages fall under the rules for PvX:ARCHIVE. IF you want to blank the page and put "Goldenstar is a fucktard." you go ahead and knock yourself out. Just make sure to put the text that's already here in an archive page and put a link to it on this page. - PANIC!

PuneY (Talk | contribs) m (→vote) ← Previous diff Line 487: bahaha, wow, i didn't expect to see THAT MUCH hate mail on your page gg, u made troll of the year, i got an idea however hypocritical it may sound you might actually want to try this build: Emo: Go Have a Shower You Smelly Bastard, Go Out and Get a Girlfriend.

hmmm yea i would say something like the guy above but i will say this, 4 troll votes does not constitute abandonment sorry...

Funny enough it wasn't a couple minutes after it was 1 minute, and yet don't talk found the need to edit my comments? you guys are fukt in the head seriously, you revert back just so you can have an E-war, you cunts really do need g/f's or a life or something i dunno....PuneY 07:57, 16 July 2008 (EDT)

Dont (Talk | contribs) m (...) Next diff → bahaha, wow, i didn't expect to see THAT MUCH hate mail on your page gg, u made troll of the year, i got an idea however hypocritical it may sound you might actually want to try this build: Emo: Go Have a Shower You Smelly Bastard, Go Out and Get a Girlfriend. —The preceding unsigned comment was added by PuneY (contribs) .

hmmm yea i would say something like the guy above but i will say this, 4 troll votes does not constitute abandonment sorry... guess who? oh you can't guess can you! you actually need people to add the 4~ because u troll vote that often. soz mate. —The preceding unsigned comment was added by PuneY (contribs) .

^^that revert was 6 minutes later, so unless he was just writing a extremely long winded discussion about his cat fetish, he looked into history to see what i had written, awesome moderating skillz u da leetness!!~PuneY 08:05, 16 July 2008 (EDT)

I'm sorry, but all of that is so messy that I haven't got a clue what you're going on about. All I'm saying is if you want to blank your own talk page (this one we're talking on right now) then you are allowed to do that. However, you need to save everything that is here already on a sub-page (for instance User_talk:PuneY/Archive1) and put a link to that sub-page on this page. We call it "Archiving". - PANIC!

what i am saying is admin edited my post to start an e-war, i edited an abusive post 1 minute after posting it as i realised it was abusive and i was posting angry, then 6 minutes later dont talk edited my post to show the abuse... this whole archiving your going on about is all because of the rule you cannot edit other peoples post, but what admin can?--PuneY 08:45, 16 July 2008 (EDT)

You can edit your own, but you aren't supposed to delete anything. He was just reverting the deletion, it wasn't malicious at all. In future, if you want to change what you've already written, then use the <s> and </s> tags. They will strike out what you've written like this: Hi there, Puney!. Just think of them like bookends; The <s> one goes before what you cross out and the </s> goes where you want the crossing out to stop. - PANIC!

that's seriously retarded, while it was a MAJOR edit, it was still an edit nonetheless, no-one had posted after me as it was only ONE MINUTE after posting, and 6 minutes between revert.... seriously, he could have easily left it. It was an edit, if it was a deletion then there would be NO post, but i replaced it with one that was more mature.--PuneY 09:09, 16 July 2008 (EDT)

It's a common policy on very many wikis and unfortunately deleting any content from a talk page is a breach. - PANIC!

yeah, don't remove existing comments even if they were yours. put <s></s> around it, apologize, and move on.

He probably just spotted you reducing a page's size and investigated, tbh. It's fairly transparent in Recent Changes when you delete something off a page. - PANIC!

I added those builds to stubs then realised they can be modified/etc by pub, anyway i can delete stubs and just add to my user page?PuneY 12:43, 17 July 2008 (EDT)