I mean LEL DANDY FEEDS ON AUTISTIC COMMENTS, due to us acting mature he has been underfed and thats why he wiped (or ate, as i would prefer) his talk page a few times--GWPirate 17:19, May 19, 2010 (UTC)

It's everybody draw Mohammed day! 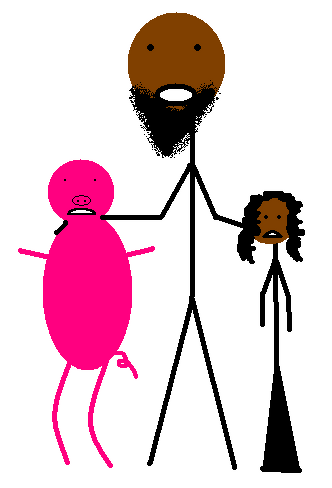 That was actually a picture of 2 smileyfaces with: "One of these two is Muhammad, which one makes you angry?" underneath. The irony of it coming out as a white square with the forbidden sign in it is just too amazing to change though. --Brandnew 14:43, May 20, 2010 (UTC) I'll say this now before more come in. I have no objection to people participating. I do have an issue with drawing it in offensive manner (Steamy (now deleted)) or naming (Chaos (now moved)). Anyone who wants to do either of those is free to have a vacation. ~ PheNaxKian talk 16:42, May 20, 2010 (UTC)

"if millions of people draw pictures of Muhammad, Islamist terrorists would not be able to murder them all, and threats to do so would become unrealistic." Knock on wood? phen should make one as well and stop trying to act mature tbh--Relyk talk 23:06, May 20, 2010 (UTC)

Banned mcdandy, i believe you wanted me to post this? That if a strong magical eastern wind catches you, you quickly need to hex yourself in the direction of the wind to avoid being turned into a blue zombie, mostly resembling an afflicted. I fled a couple of times to a local mall which I had checked out. Then I discussed with Voldemort who was behind it all and we had some epic fun together, and I couldn't realize why such a neat guy would want to kill me. --Chaos? -- 21:02, June 4, 2010 (UTC)

About kayaking down rapids with some friends. At some point we came to some waterfalls. This one cute guy among our group kissed me goodbye (my god was that a sweet kiss) and jumped down, I think it was a part of a dare. Then some other guy jumped after him, suddenly showed up running at an incredible speed up a hill, and this other guy showed up, bleeding from his chest. I pressed the wound, feeling the blood flow out in pulses. His last words was whispering his real name to me, which turned out to be a girls name.
Romantic tranny dreams involving kayaks and rapids and dams. Just the way I like it. --ςάοχ? -- 21:51, June 7, 2010 (UTC)

Since Guild Wars sucks, and nostalgy is all the big deal

Give me your account. I need one after getting banned. I won't change the password in case you ever want to come back :p Life Guardian 22:12, June 6, 2010 (UTC)

Because I love you 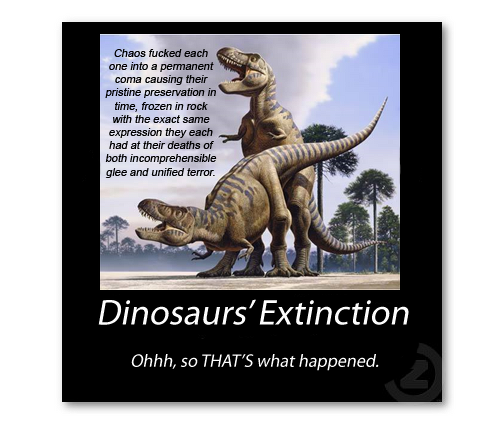 Sounds about right, though the picture shows a dinosaur fucking a dinosaur. It was more them just losing all consciousness in indescribable pleasure, no physical entities involved. --χάος? -- 19:56, June 7, 2010 (UTC)

They're just dryhumping. You're actually in the labia jacking off the male dino. Karate

thanks =). I know it's a stupid compromise, but it just didn't look like "chaos" to me as it was =s ~ PheNaxKian talk 21:36, June 7, 2010 (UTC)
An ending sigma at the beginning of a word? How dare you defile Greek, Chaos. And you should be ashamed, Phen. I'm upset. Also, σαοχ doesn't mean anything. It sounds kind of like "socks" in archaic greek, though. Therefore, you new nickname is Socks. Later, Socks. Karate

Well, Russian (like a lot of languages) was based on Greek. Fucking Greek Orthodox ruled that area forever. Karate

κάος would probably be a name, but it's not a word. I like σαοχ cuz it sounds like Socks :D Karate

I realize that it was an exceptional situation, but usually you're only meant to abbreviate obvious and previously established phrases, like csc. Otherwise it's completely lost, and doesn't serve much of a purpose beyond having people guess what one actually meant - a fun thing in itself, but perhaps not the most convenient. --ςοάχ? -- 22:12, June 9, 2010 (UTC)

he stalks my page so hard lol

If he meant me, he failed his social reads again, which is just fucking hilarious, so I couldn't do anything else but to give a friendly face and gtfo to laugh somewhere :p If he meant you again, I already said that he failed the reads, so zz! :> --ςοάχ? -- 05:29, June 11, 2010 (UTC)

My god with your indents ;p But yes, exactly. I archive so fast that I still have the time to steal a couple of virginity's meanwhile, and you'll hear their moans before you hear my "woosh".
Also, while looking up the spelling, I found the following example of "virginities";
"HILDA. But do you remember what you wanted me to do? The nasty—thing I thought was nasty? … BERT. No, Hilda. Go like you came. Leave this place with your various virginities intact." --ςοάχ? -- 06:15, June 11, 2010 (UTC)