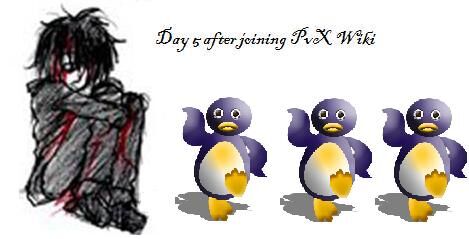 I was in FA the other day farming for jade, and I got a team-mate that was using poison arrow. So I gave him a hearty helping of shit about being terrible and he said "Its used with bleeding for Tainting" - My question to you is what is tainting? because ive never heard of it. And whatever it is, Why is poison arrow more usefull than poison tip sig or better yet apply poison? --Briar

Alright. Now what to Tainted Flesh and Poison arrow have to do with eachother? --Briar

Okay, So now the final question. What can poison arrow do that Poison tip sig/Apply poison Cant do? --Briar

you can barbed + poison arrow «Novii« 22:35, March 7, 2010 (UTC)
Or you could Apply/Sig for poison and then hunters. And still have room for a more usefull elite. So again. Why poison arrow? --Briar

I dont understand how that build could possibly be meta. Theres so much wrong with using barbed over apply i cant even begin to describe it. =/ --Briar

What. You can maintain burning on the whole opposing team with a preparation and a cheap elite. Add a generic ranger bar and you have a ton of utility and pressure. --Chaos? -- 22:47, March 7, 2010 (UTC)

After thining it through I would like to retract my previous objection to it. I see now why poison arrow would be more usefull in that build. Took me a minute to figure it out though. lol --Briar

Dear Briar, you suck at guildwars. A poison arrow ranger can maintain -7 degen on an entire team in arenas with ease, which is such ridiculous pressure. The fact that you can spam debil +rupts is absolutely amazing. Stop being a terrible player and stfu about pvp, since you obviously don't have a clue!--TahiriVeila 23:02, March 7, 2010 (UTC)

Dear TV, Lrn2read & Lrn2indent. I figured it out before you chimed in. Stop being a shitty person and troll harder. Thanks! --Briar

tbh that unsigned comment wasn't me. And @briar the section was tl;dr so i just responded to the first comment and assumed you'd get more retarded as the thread grew :)--TahiriVeila 03:54, March 8, 2010 (UTC)

i found a video called "Internet celebrity gets mouthfucked in park", but it was taken down for obvious reasons. i apologize. ··· Danny So Cute 18:26, 8 March 2010 (UTC)

Yea, that's why I removed it and archived. Timestaaaaaamps. Karate

(can't be bothered to create a new section) "don't know our current admin team quite well enough to bash it, at least not in detail?"

you do realise that probably makes him one of the better people to scrutinise the admin team? things we'd just go "oh yeh so and so normally does that" he can sit and think "well actually an admin shouldn't be doing anything like that" ~ PheNaxKian talk 09:27, March 10, 2010 (UTC)

That's a good point, but I was more into the fact that he doesn't seem to be well aware of how our admin activity looks like, and the everyday decisions they make, because he hasn't been there to see it. --Chaos? -- 10:38, March 10, 2010 (UTC)
If someone dosen't understand the system should be taught first...then after understanding then can criticize. I understand the "new prespective" angle and shouldn't be ignored.---XTREME 11:04, March 10, 2010 (UTC)

you can see how someone handles conversations through their contributions. I changed the headings so you have access to our contributions and our logs (logs are probably the more important part so you can check we're not banning people or deleting shit just for shits and giggles).
a "new" (so to speak) perspective is good, it allows them to go "well Phen is a carebear who gives people too much of a chance and lets them get away with shit, i'd have preferred him to ban them isntead". (or something)
See this as an opportunity to tell us how to improve our admining, just because you post links to things doesn't mean we'll get demoted (unless they're really bad (intentional) mistakes) =D. ~ PheNaxKian talk 12:10, March 10, 2010 (UTC)

"My grandson was so exciting when he opened his birthday gift."

A spambot on guru just posted that. I thought you'd enjoy it. Karate