Sanctum Cay is one of a few missions which technically requires no fighting whatsoever, and also has fairly weak enemies. However, a regular team will need to withstand waves of enemies at the end and often has trouble surviving until Vizier Khilbron can raise the escape boat. Thus, runners for Sanctum Cay are somewhat in demand. Any build that has a maintainable running skill and a strong tanking setup can easily run this mission.

Grab the Scepter of Orr from Evennia. Follow the red path shown.

The mesmer boss may sometimes spawn at the end, making tanking more difficult but usually not impossible. Be wary of Shatter Enchantment (cover your vital enchantments) and Shame (avoid casting under this). 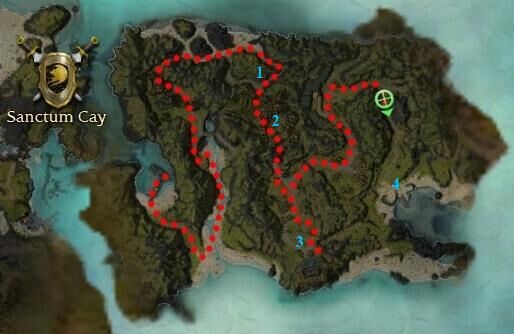 Here are some suggested skill bars for running the mission. If you don't have a skill in the build, chances are it can be replaced by other skills, or even just be dropped entirely in some cases. Equipment isn't listed for each to save space, but you should generally have max armor, high health, enough energy to recast skills comfortably, and an enchant-lengthening mod on your weapon.

A Permanent Shadow Form assassin can complete this run. You will need to drop the Scepter of Orr when recasting Shadow Form so your enchantment mod takes effect. Alternatively, just use Dwarven Stability with Dark Escape, using self-healing when needed (the mobs aren't high level). You only absolutely need SF to tank at the end.

Community content is available under CC-BY-NC-SA 2.5 unless otherwise noted.
Advertisement